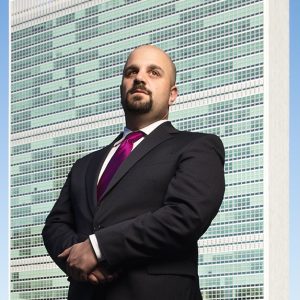 ARIEL BEN-CHITRIT IS WELL ON HIS WAY TO HIS GOAL OF WORKING FOR THE U.S. GOVERNMENT OR FOR A THINK TANK SPECIALIZING IN INTERNATIONAL RELATIONS.

“It was my first time abroad for that long,” Ben-Chitrit says. The interdisciplinary studies major has also visited Australia, Israel, and some of the Baltic states.

Assigned to the AJC’s development department, he worked on preparations for some of the AJC’s international missions. His duties included preparing briefing papers and researching individual nations’ policies.

Heady stuff for a bright young man who didn’t receive a correct learning disability diagnosis of attention- deficit/hyperactivity disorder (ADHD) until he was 23.

Because he had an Individualized Education Program from second grade on, Ben-Chitrit did well in his K-12 years, despite his ADHD.

After “bouncing around” a few colleges, though, he signed up for a community college’s baking and pastry program.

When his mother heard about Beacon, Ben-Chitrit says, he was one semester short of finishing his certificate. “I turned down an internship in one of the top restaurants in Connecticut,” he recalls.

He approached the possibility of completing a bachelor’s degree at Beacon from a practical perspective. “If it didn’t work out,” he says, “I could always come back to baking.”

But it did work out.

“The big thing for me at Beacon that was really helpful was the learning specialist model,” he says. “Having that extra support there to make sure I was on top of what needed to be done.”

His learning specialist helped him decide how to break down long-term assignments and keep track of his deadlines, he says.

“Beacon gave me tools to manage my time more effectively…and to keep me in an organized mode.”

“They all had the ability to guide me in the right direction in ways that were relating to what was going on in class.”

Ben-Chitrit credits Beacon’s career center with providing the opportunity to teach in China for a year.

“The organization that sponsored the [China] program reached out to Beacon’s career center director,” he says, and she forwarded the email to Ben-Chitrit because he was one of the first students she thought of.

Now Ben-Chitrit is preparing for graduate school at the Interdisciplinary Center, a research university in Herzliya, Israel. His degree will be in government, he says, “with a concentration in counterterrorism and homeland security.”

What he does after that depends on world events.

“It depends on what the world looks like when I graduate,” Ben-Chitrit says. “It may be prudent to go for a Ph.D. right away. It may be that the world is falling apart, and they need as many people as they can get to make sense of it.”