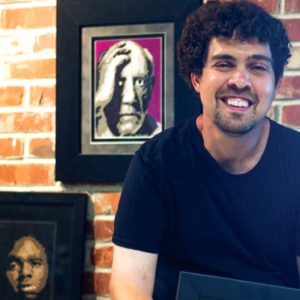 LIFE IS GOOD FOR NATHAN PLUNG — AND IT’S GETTING EVEN BETTER.

The 2007 Beacon College graduate is winning recognition for his artwork, including a gallery showing in New York City.

“It truly was a dream come true,” says Plung, who specializes in cross stitch portraiture and also sells his work through his website, nathanplung.com

The West Richland, Wash., man discovered cross stitch when he was eight and watching an older cousin stitch a blanket. “She bought me my own kit, and the rest is history,” Plung says.

His art is a huge source of satisfaction to him, Plung says, but so is the job he holds assisting disabled individuals in a community program that includes classes and recreational activities. His work there has so inspired him that he’s pursuing an online graduate degree in disability studies from the City University of New York.

By the time Plung arrived at Beacon College, he had experienced some rough times because of his own disabilities. As a student with cerebral palsy, epilepsy, and an auditory comprehension learning disability, “I got by, by the skin of my teeth,” he says. “I was a C and D student the whole way through.”

During his high school years, though, Plung worked as a pediatric physical therapy aide and enjoyed the experience. After graduation, he attended a technical college, hoping to get a degree in physical or occupational therapy. When that plan didn’t work out, Plung took a few years off from higher education.

His parents eventually suggested touring a couple colleges for students with learning disabilities, and Plung went along, reluctantly.

“I was a little apprehensive because I didn’t know if I could cut it,” he recalls. “But by the time we finished the Beacon tour, that whole thought of being unsuccessful disappeared. We walked away from Beacon thinking there was no reason to go anywhere else.”

At Beacon, Plung majored in human services, with a minor in psychology. And he learned how to manage his auditory comprehension problem.

“The wonderful thing about Beacon is they help all their students manage their disabilities in the classroom by teaching to all of the learning modalities in one class,” he says. “If you’re stronger in auditory, you’ll get the lecture. If you’re a kinesthetic learner like me, you’ll get all the hands-on learning.”

Plung emerged from Beacon College with a degree and with self-confidence that has enabled him to pursue his twin passions of art and disability advocacy.

Boldly approaching galleries with his portraits, and fearlessly enrolling in graduate school: Those are the actions of a guy who knows he can succeed.

“I’m absolutely in love with my job,” he says. “I have high ambitions for climbing the ladder there.”

Plung also has high ambitions for his art, which he creates from photographs. “A lot of my portraits are of influential people like Mother Teresa, Picasso and Martin Luther King,” he says. “Where I want to get to with my artwork is people giving me requests for a personal picture, something that’s meaningful to them.”