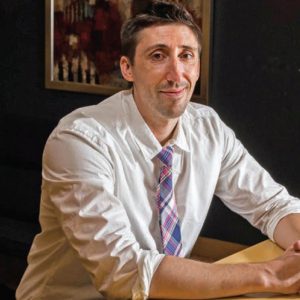 SCOTT WILBUR KNOWS WHAT IT’S LIKE TO BE MISUNDERSTOOD, LABELED, AND BULLIED BECAUSE OF LEARNING DISABILITIES.

“My earliest memories are of a teacher asking me why I was so stupid in front of the class,” Wilbur says. “She was really angry because I couldn’t remember the month of the year.”

The 2009 Beacon College graduate “struggled from first grade on” with processing and nonverbal learning disabilities and ADHD.

“I was going to be the dumb kid either way,” he recalls. After transferring to special ed, he says, “it switched from being the kid who’s not that bright to the kid who’s in special ed, and then I got made fun of for that.”

As he got older, Wilbur developed his own way of coping with his inability to read aloud or answer certain questions: “I’d either get really funny, or I might throw a pencil or act up some way so I could get kicked out of class,” he says. “In my senior year, I held the distinction of being the only student to have in-school suspension every day.”

Although he “blew off school” because of his experiences there, he still aspired to higher education. “I wanted to be challenged and to contribute but didn’t think it was possible,” says Wilbur.

Today that discouraged student is an accomplished educator and owner of Next Level Transition Consulting in Alexandria, Va. The company provides “career and life coaching for diverse thinkers” — Wilbur’s term for individuals with learning disabilities.  “We help people get jobs and build social skills and social networks,” he says.

He credits Beacon College with preparing him to lead his own company. “They taught me the mechanics of how to be successful,” says Wilbur, who graduated in 2009 with an associate’s degree in human services.

“I was always bright but never had that executive functioning for time management, remembering appointments. I was always using my talent to just catch up rather than achieve.”

His Beacon learning specialist helped him narrow that gap by giving him “all those tools that ‘normal’ people have,” he says. “It really leveled the playing field for me.”

During the years between high school and attending Beacon, Wilbur had worked a number of jobs, including a stint teaching special education students. “I loved it,” he says, and the experience led him to pursue special education as a career.

After graduating from Beacon, Wilbur attended Marymount University, where he earned a bachelor’s degree in multidisciplinary studies. During the summers, he taught for free and “decided I’d do the whole teaching certification thing.”

Now he’s helping clients of all ages and disabilities, “teaching people how to deal with life and get what they want,” he says. Some of those clients are highly paid engineers and computer scientists.

“For somebody who was told for the first half of my life that I’d never do anything of value,” he says, “it’s nice to have so many smart people asking me what to do.”