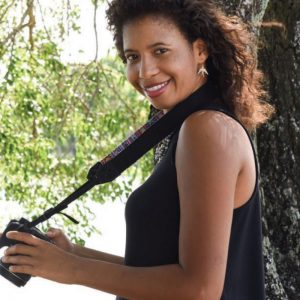 A CAREER TEST THAT TAYLOR DOLEMAN TOOK FOR FUN IN 2016 SHOWED PHOTOJOURNALISM AS A GOOD CHOICE FOR HER. THAT WAS A SURPRISE.

“I’ve always taken pictures of things that captured my eye,” Doleman says. But the idea of constantly being away from home shooting news events didn’t appeal to her.

Still, the 2010 Beacon College graduate’s curiosity was piqued, so Doleman started posting her photos on social media — “and people really liked them,” she says. So did a professional photography company in South Florida, which hired her as a second shooter for their wedding business.

“I wasn’t sure I wanted to do weddings, but when I shot my third or fourth, I was hooked,” Doleman says.

So hooked that she’s opened her own photography business and hopes to eventually specialize in weddings.

Still, the reluctant future shutterbug “dibble-dabbled” in modeling, camp counseling, and retail after receiving her degree in liberal arts.

Beacon was a logical choice for her college education.

“Beacon provided a lot of support, which was really helpful,” says Doleman. “But by no means was it easy.”

Besides the educational support, her years at Beacon taught Doleman how to manage her time and to develop a strong work ethic. As someone who used to put off some projects until the last minute, she quickly learned that “in college, you cannot procrastinate.” That’s because “I wasn’t the kid who could just not study and get straight A’s,” Doleman recalls. “I had to work at it.”

Those lessons from college are paying off now that she’s an entrepreneur.

“In the business I’m running now,” she says, “you have to be persistent and have a strong work ethic or else you’re not going to get anything done.”

Having found her passion, Doleman has developed a grand plan that includes moving her business to Atlanta, where her parents live, and returning to school for a two-year degree in photography.

Given the high number of competitors in the photography profession, Doleman says, she figures potential clients will prefer someone who has a degree in the subject to someone who doesn’t.

“When I find something that I know I want, I jump in feet first,” she says. “I have to know everything about it.”

Doleman’s focus will be wedding photography, but she already knows what the rest of her business will be.

“When the wedding season is slow, I’d like to do infant photography, maternity shoots, and family photography,” she says.

Nothing beats shooting weddings, though.

“It just makes my heart so warm to just be a part of somebody’s special day and catch all the little moments of their day,” Doleman says.

“It’s almost magical, a beautiful thing that happens on that day. To be a witness to it with your camera is really special.”