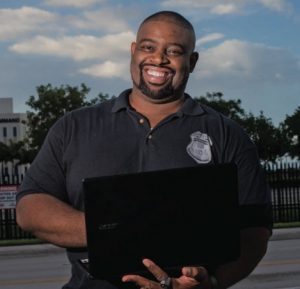 EVERY DAY ON THE JOB IS A CHALLENGE FOR JAMAR BUTLER — AND THAT’S WHY HE LOVES GOING TO WORK AT THE U.S. SOUTHERN COMMAND IN MIAMI, FLA.

“Technology is constantly changing,” Butler says. “With the government, you get to see most of these new things that are being developed.”

Butler, a 2009 graduate of Beacon College, started work as a cybersecurity analyst with the Southern Command in 2011. In between, he worked for a Fort Lauderdale telecommunications company as an assistant support specialist.

At the Southern Command, Butler started out as an intern and then was hired as a contractor. Soon thereafter, he was brought on as a full-time employee of the government.

Butler had been interested in computers before attending Beacon, he says, but not enough to imagine himself in a technology career. Then he discovered Beacon’s “extraordinary” computer information systems program.

“After I dipped into computers, I kept going at it, kept reading, tinkering, taking them apart and putting them together,” he recalls.

Beacon College not only equipped Butler with computer skills, it helped him deal with his attention-deficit/ hyperactivity disorder (ADHD), which had made it difficult for him to focus on his studies in his K-12 years. At Beacon, he learned, for instance, that he could control his ADHD with changes to his diet and lifestyle.

“Soda is the No. 1 thing,” Butler says. “I love drinking root beer, but the sugar and acids within the drink really set off ADHD. That was one of the biggest things I had to give up. Now I drink nothing but water, milk or green tea.”

To this day, he works with a personal trainer to keep in shape, Butler says, and his diet revolves around proteins and low-carb foods.

His years at Beacon also prepared Butler for the professional world as well as for life after college.

“My speech and writing skills improved,” he says. “They educated me on how to properly write a paper. Beacon has helped me dramatically. Everything worked out for me. It was time and money well spent.”

That’s why he still makes occasional trips from Miami to Leesburg, for such things as alumni gatherings or fraternity get-togethers.

Butler is proud of his success in life, and especially of the master’s degree in information technology that he’s earning from Nova Southeastern University. His long-term goal is to work for the FBI as a cyber analyst or forensics examiner, and his graduate degree will enable him to apply for FBI positions.

They educated me on how to properly write a paper. Beacon has helped me dramatically. Everything worked out for me. It was time and money well spent…

In the meantime, though, Butler wants to see more of the world.

“I love traveling,” he says. “I’d like to experience new things before I settle down and get married and have children.”

His job as a cybersecurity analyst is rewarding not only financially but on a personal level as well, Butler says.

“Knowing that you’re doing what you can do to provide soldiers in Iraq or Afghanistan with the information to get their job done — there’s a certain pride in that.”