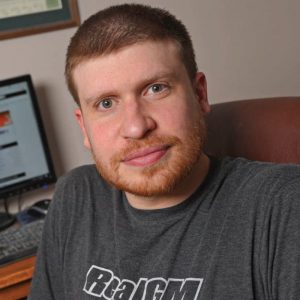 “DO WHAT YOU LOVE AND YOU’LL NEVER WORK A DAY IN YOUR LIFE.”

It’s a cliché that neatly sums up Howard Mass’ career. The 2007 Beacon College graduate is a partner in the sports website realgm.com, which offers daily news, statistics, and message forums related to sports. As a site administrator, Mass also oversees some of the website’s sections, writes his own thoughts on the forums, and contributes a column — all while working from the comfort of his Longwood, Fla. home.

Life wasn’t always so good for Mass. His struggles with attention deficit disorder (ADD), processing problems, and motor skills hindered him throughout his K-12 years.

“It was always on and off,” Mass recalls. “There were times I’d be one of the standout students, but then the ADD made me a little hyper, and I was a troubled student.”

After high school, Mass attended a community college but found the environment ill-suited to his learning style. “I’m very auditory and visual,” he says. “I like to have things explained to me” instead of reading a textbook.

He also prefers class discussion that engages all the students to instructor driven lectures.

After giving up on community college, Mass found his way to Beacon College, where his learning style fit right in.

“It was a great three and a half years,” he recalls. The professors used techniques to accommodate each student’s disabilities, Mass says, but “they didn’t spoon-feed us; they challenged us.”

His years at Beacon prepared Mass not only academically but in other ways as well. While majoring in liberal studies — with minors in history and business administration — Mass quickly found that Beacon “prepares you for life.”

“They don’t let you feel sorry for yourself just because you have a learning disability,” he says. “They push you to be the best you can be.”

Beacon raised the bar for Mass, and that high level of expectation “has carried over to the work I do and a lot of other aspects of my life.”

Mass developed critical thinking skills that help him every day in his job. “I’m an administrator of a message forum that has over 100,000 registered users,” he says. “I have a staff of about 180 moderators. Sometimes there will be conflicts, a decision on whether this user gets banned or suspended. I have to make that decision. Sometimes it’s real easy, but sometimes it’s a borderline case and there will be moderators who disagree on the final decision. I take all of their input and make the best decision.”

Mass has been associated with realgm.com since its inception in 2000. “When I found out about the site launching, I contacted them,” he says.

What started out as a “fun hobby” has become a full-time career that melds fun with work. “Players have been known to view the site, basketball executives, and some media have come to our website,” he says. “To see a site that in 2000 was a startup become this huge website is mind-blowing,” he says. “It makes you real proud.”